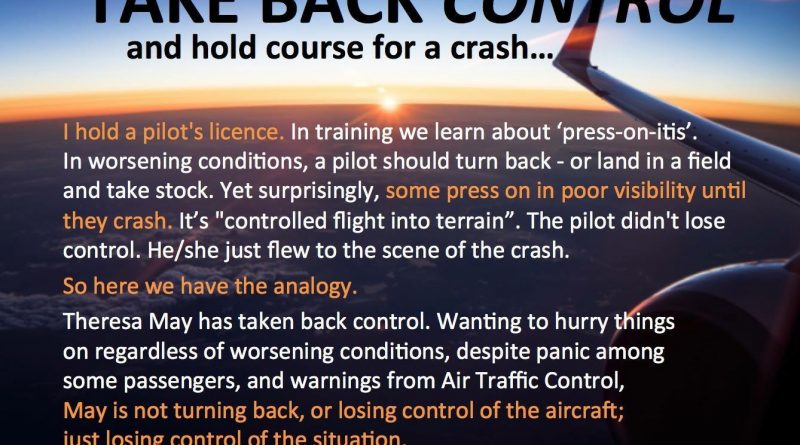 Andy Pye looks at the psychology behind the human failing to turn back, even when the odds are against them.

I found an interesting post on Facebook this week by Jim Blythe, a Cardiff-based private pilot. Jim says:

“I hold a private pilot’s licence. In the ground school training, we learn about what are called human factors: the physical and psychological factors that can lead to poor piloting. One of these is called (variously) press-on-itis, tunnel vision, or get-home-itis. It occurs when a pilot is flying in steadily worsening conditions, and subconsciously wants to get to his/her destination and land, to be safe again. Obviously, what one should do is either turn back to the starting-point, or if that’s not possible, land in a field and wait for things to improve: better to annoy a farmer than crash.

“But people are people, and surprisingly frequently pilots press on in poor visibility, eventually either getting away with it, or all too frequently crashing – what is called a “controlled flight into terrain”. The pilot didn’t lose control, he/she just flew the aircraft to the scene of the crash.

“So here we have the analogy with Theresa May’s current situation. She has taken back control, but conditions are getting worse: wanting to get to the destination, she is hurrying things along as fast as she can, so it will all be over as fast as possible. She is ignoring the worsening conditions and pressing on regardless, eventually heading for a controlled flight into terrain. Despite the panic among some passengers, despite calls from Air Traffic Control warning of the conditions, she is not turning back, or even landing in a field to assess the situation. Not losing control of the aircraft, just losing control of the situation.”

Interestingly, such a situation is not only found in aviation, but in mountaineering and in sailing too. I’ve been mountaineering with people of the ilk who are determined to get you stuck or killed. Chris Bonington said that the best mountaineer is the one who knows when to turn back. Sensible advice. The ones who don’t do that end up in a mess.

Other respondents quoted situations on Cape Town’s Table Mountain and on a Scottish hillside: “For me it wasn’t a mountain, just a large hill, not even quite a Munro – Goatfell on Arran in Scotland – but we made this mistake, in a small group neither experienced or well-equipped some years ago, we continued on climbing into cloud on the hilltop. A more experienced local coming down from the summit warned us the path ahead became unpleasant, but we pressed on assuming everything would be fine and we could always turn back if we didn’t like it.

“Goatfell then tried assiduously to kill or injure us. Near-nil visibility in the cloud and raining, we lost the path and after crossing some clearly dangerous sections we did not dare turn back; and weren’t equipped to stop and spend the night.

“We did make it to the top and the descent the other side was much easier, but the relief of reaching that and then finding a way down I still remember. If any one of us had injured ourselves in the difficult part – even slightly, such as a turned ankle or a small fall – we would have needed rescuers.”

Most MPs are not pilots

The same situation can easily occur in the business world, where it is known as “sunk cost fallacy.” This is the tendency to keeping spending more money once you’ve put money and effort into a thing even if it’s clearly not going to deliver as expected. There’s a strong desire to finish the job, even if cold blooded analysis says it’s not going to work. It’s a real issue for new and small businesses that aren’t working out, and common advice is to put exit conditions into your plan: if it doesn’t deliver this margin in this timeframe then wind it all up to preventing much bigger losses from bravely but foolishly soldiering on. Brexiteers please note.

While most MPs are not pilots, many pride themselves on their business acumen, and yet they are making what would be a rookie mistake in business planning and risk management. Most probably don’t have the lessons of piloting to draw on, but many of them would know exactly what the sunk cost fallacy is and many would also know strategies for avoiding being beggared by it.

In flying, these sorts of biases are balanced by drills and systems of rules. So that when the difficult things happen, it’s easier to follow the system and do the right thing – and harder work to violate the system and go with the gut desire. It feels like our lack of system around constitutional change and referenda means that there’s been nothing to keep everyone on a sensible course; instead they’re in a dangerous place with only gut instinct as a guide and not able to recognise how dangerous that is.

Prime Minister May has taken off for an unknown destination, with neither a flight plan, nor a trustworthy, competent flight crew. It’s as if people have taken on board Gove’s rejection of experts. The passengers have decided they know how to fly the plane better than the experts and by a show of hands have replaced the pilot with a passenger who has no qualifications but is brimming with confidence after two stiff G&Ts.